Anybody who’s been drinking kava for a while will know that not all kava is the same. Some products are clearly more potent than others.

The most common type of kava product is the dried powdered roots — but it’s far from the only kind.

So which type of kava product is the strongest?

Based on the potency of the active ingredients (called kavalactones), the clear winner here are kava concentrates. These products contain active kavalactones in concentrations up to 70% — which is significantly higher than the 7–14% found in most kava root powders.

Kava capsules and tinctures are a close second — offering concentrations of up to 40% pure kavalactones.

Ranking the potency of kavalactones for kava products (from strongest to weakest): 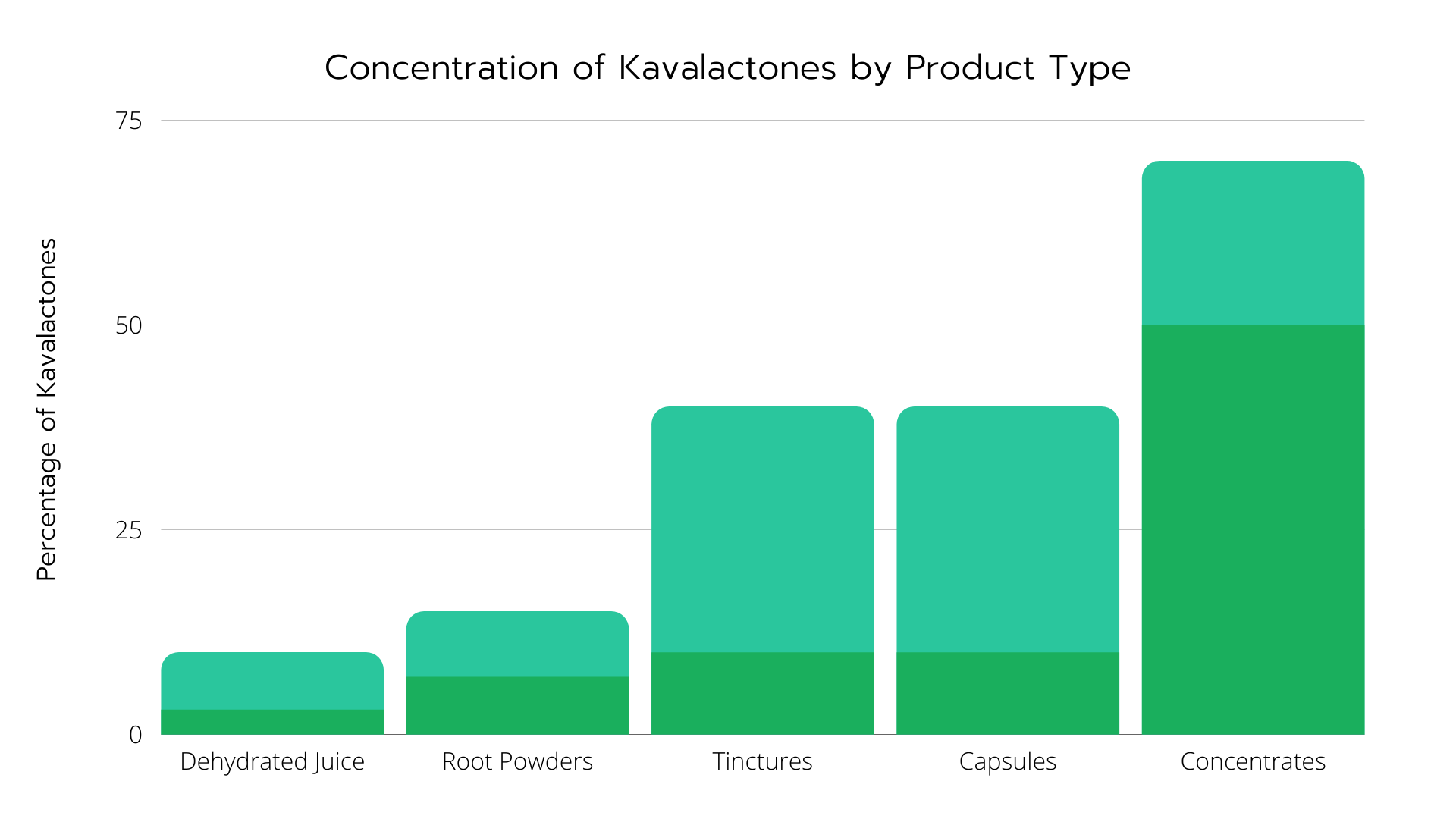 There are 4 factors to take into account when searching for the strongest kava products in a given category:

Let’s review some of the strongest kava products in each of the major categories.

The best way to compare the potency of kava tinctures and liquid extracts is to find out the concentrations of kavalactones in milligrams per mL of liquid.

Most kava tinctures contain somewhere between 20 and 100 mg of kavalactones per mL of liquid extract. A strong kava tincture is considered anything over 75 mg/mL.

The standard dose of kavalactones in tincture form is around 100 – 200 mg total — so the stronger the tincture, the less you need to reach this ideal dose.

In general, the liquid kava concentrates are going to absorb more efficiently and provide high doses of kavalactones with just 2 or 3 capsules.

Micronized capsules are best used for lower doses (one or two capsules maximum). If you take too much, these products can cause unwanted digestive upset pretty easily.

Kava root powders usually contain between 3% and 15% kavalactones. The average kava has around 7 or 8 percent, while the strongest kavas have at least 11% kavalactones.

It’s important to note that the potency of kava roots will vary from one harvest to another. Factors like the amount of rainfall, tropical storms, and soil conditions will all affect the potency of the roots. It takes four or more years for kava to reach maturity, so anything that happens to it in those 4 (or more) years can change the concentration of kavalactones in the final product.

We’ve ranked kava powders available from the most reputable brands based on the percentage of kavalactones from their most recent harvest. Please take this information with a grain of salt. All of the kavas on this list are very potent, but the specific order may be different depending on when you place your order.

The strongest kava root powders include:

Kava concentrates are the strongest class of kava products. By definition, they consist purely of kavalactones — all the fibers, proteins, and other phytochemicals have been removed — leaving behind a concentrated mix of kavalactones and kava resin.

Most kava concentrates are named according to the region the roots came from and the concentration of kavalactones by weight. It’s rare to find concentrates of single origins kava cultivars — rather, they tend to be made from a blend of kava roots from a particular region. Many companies will use the unwanted parts of the basal stem to make the concentrate or strains that normally cause unwanted side effects on their own.

The concentration process helps eliminate the flavokinin B that makes the effects of some kavas unusable.

Root of Happiness dominates the kava concentrate space. They carry the strongest concentrates for both noble kava (Polynesian Gold) and tudei kava (Pride of Papua) — both of which contain 70% kavalactones by weight.

They also make a weaker 30% extract of their noble kava extract.

Most other kava extracts use the Root of Happiness concentrates as the source ingredient, so we’ve excluded them from our list.

The strongest kava concentrations include:

There are more than 100 different strains of kava (called kava cultivars).

In order to count as a unique strain of kava, a plant must have its own unique appearance or chemical profile. Strains are developed through selective breeding. Farmers will replant roots with traits they like and discard roots from the plants they don’t like. This practice has been taking place for hundreds of years — which is what has led to such a wide diversity of different kava strains on the market today.

Some strains of kava are much stronger than others. This is based on the total concentration of kavalactones as well as the ratio of each ingredient.

Technically, the strongest kavas are the tudei kavas. They produce very potent effects similar to marijuana. They can make users feel drunk for several hours or more from just a few cups. However, tudei kavas also cause nausea, disorientation, lethargy, and a general sense of malaise — they definitely aren’t recommended.

The only exceptions are strains like Palisi or Isa kava. These are two mild forms of tudei kava available from vendors like Root of Happiness and Kava Society New Zealand. Only very experienced kava drinkers should try these ones.

Noble kavas have much more desirable effects but aren’t quite as strong as tudei kava — meaning that you’ll need to drink more cups of it to reach a comparable “stoned” sensation.

Noble kava can be grouped into three main effect profiles:

Strong heady kava feels very different from strong heavy kava. So before selecting a specific strain based on how strong it is, make sure you’re familiar with the differences in these effect profiles.

Hands down, the strongest heavy kava are the Rahmwanger and Rahmdel kavas from Micronesia. These cultivars are similar to tudei kavas but way less likely to lead to unwanted side effects. They still need to be used slowly and carefully to avoid going overboard.

Other strong heavy cultivars include Hina Akau and Huli Akau from Tonga or Ikaika and Pana’ewa from Hawaii.

There’s a notable lack of strong heavy kavas from Fiji. Most of the kava here is considered balanced or heady and is generally milder overall.

The strongest heavy kava cultivars include:

The strongest heady cultivars tend to fall in group H or group I chemotypes and usually come from the islands of Vanuatu.

There are plenty of strong Fijian kavas, but kava from this region tends to be more mild and mellow. The exception here is Vula Waka which is a notoriously strong heady Fijian kava.

The strongest heady kava cultivars include:

From Fiji, the strongest cultivars are Dokobana Vula and Vula Kasa Leka.

Other strong heady kavas include Pouini Ono from Tonga and Ava Lea from Samoa.

If you like the idea of a balance between both heady and heavy effects, there are some really strong options in the balanced category as well.

Balanced kava usually starts out feeling heady and will transition to a more heavy effect over the course of a few hours.

There are a lot of strong balanced kava strains spanning all chemocode groups (primarily G, H, and I). Some of these strains will vary from one person to another. A strain I consider balanced might feel more “heady” to someone else.

Keep that in mind when shopping for balanced kavas — everybody is different, and every batch of kava may have a slightly different placement on the scale of heady to heavy.

With that said, the strongest balanced kava cultivars include:

Most people are under the false impression that stronger kava is inherently better — but this isn’t necessarily the case.

Take tudei kava, for example — this type of kava is undeniably the strongest you can get, but the effects are far from desirable. Noble cultivars are weaker overall, but the psychoactive effects are much more enjoyable.

There are similarities within the noble kava range as well. Some strains are very strong but may not offer the effect profiles you’re looking for — or even worse, they could bring a high risk of unwanted side effects along with this increased “potency.”

Rather than focusing solely on the strength of kava, emphasize ordering kava with the effect profiles you want (heady, heavy, balanced) and order from reputable manufactures. Most of this stuff is going to be perfectly sufficient. 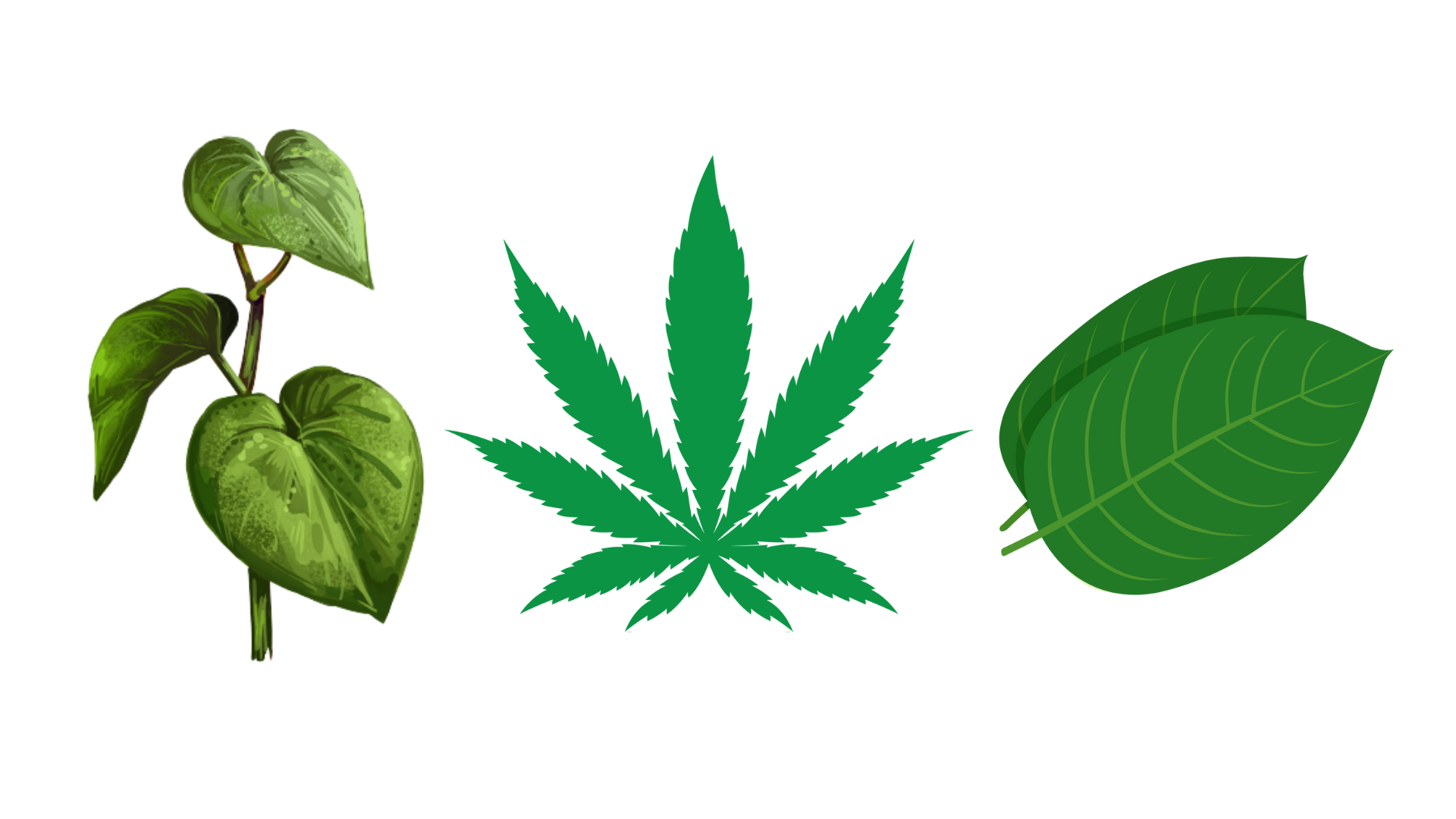 Kava vs. Marijuana vs. Kratom: What’s The Strongest Psychoactive Herb?

Kava is just one of several psychoactive herbs. The most well-known, by far, is cannabis, but kratom and kava are gaining in popularity in the Western world as well.

So which one is the strongest?

This comparison is difficult to make because the effects are very different for each.

In terms of the inebriating effects, cannabis is probably the strongest, followed by kratom. Both of these herbs have a strong high if you take even moderate doses.

Kava rarely makes users drunk unless they consume large doses. The saving grace is that kava is very long-lasting. It’s common to spend an entire afternoon or evening drinking kava. After several rounds of kava, you’re very likely to reach a state referred to as “crunk.” It’s similar to being drunk, but without the inebriated mental capacity. You can still think, act, and talk as though you were sober.

Getting crunk from weed or kratom is very different, and it’s much more difficult to maintain your “cool” when consuming these herbs in large doses.

If you like the psychoactive effects but want to maintain a relatively clear headspace — nothing beats kava.

The exception here is tudei kava or many of the Papua New Guinea strains. These kavas will inebriate the mind and make you feel very drunk for several hours at a time.

Key Takeaways: Which Kava is Strongest?

In general, kava is a milder psychoactive plant than other psychoactive herbs — such as cannabis or kratom. But that isn’t to say kava can’t be quite strong.

There are several kava cultivars on the market that are strong enough to cause users to feel a sort of drunk or “crunk,” as it’s referred to in the kava space.

The strongest tincture is the Root of Happiness Liquid Kava Extract, and the strongest kava capsules are made by Gold Bee (both liquid and micronized capsules available).

The uncontested manufacturer of the strongest kava concentrates is the Root of Happiness.

Did I miss something? What’s the strongest kava product you’ve tried? Feel free to submit your suggestions to [email protected].