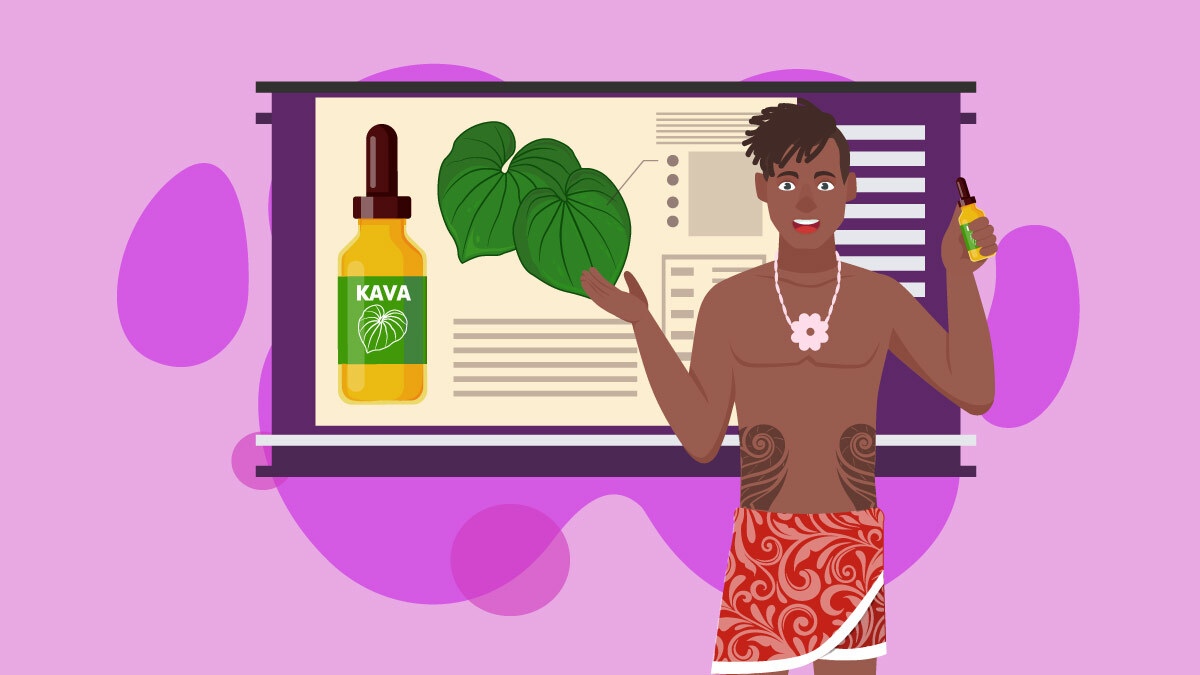 Humans have been using kava for well over 1000 years for supporting stress & anxiety, sleep, meditation, pain and inflammation, and much more.

But are any of these uses substantiated by evidence?

Is there any research on kava and its active ingredients?

In this article, we’re going to map out the scientific literature involving the kava plant. We’ll cover each stage of research, from the highest level (meta-analysis and RCTs) to the lowest (animal research and in-vitro cell cultures).

I’ll also provide a brief explanation of what each type of research is, and what it’s role it in the big picture of kava research.

If you’re looking for evidence for the use of kava, you’ve come to the right place.

Is There Any Scientific Research to Validate the Effects of Kava?

Luckily, there’s a lot of research on the kava plant (Piper methysticum).

Early interest in the plant through the 70s and 80s sparked a ton of research programs investigating and mapping out the chemical profile of the plant, and doing some early preliminary clinical research for the most common uses, and safety of the plant.

Unfortunately, everything came to a halt after 1988 when an Australian research paper was published suggesting kava has liver-toxic effects. Researchers in the study noted kava use caused an increase in γ-glutamyltranspeptidase (γGT) and a decrease in bilirubin — both of which are signs of liver damage.

However, these claims have since been disputed with newer research — showing other liver metrics to remain perfectly healthy (such as ALT, AST, and ALT). It’s thought the initial findings of liver damage were the result of alcohol or medications instead of the kava.

After a 10 year hiatus from kava interest, things started to pick back up.

Throughout the 2000s and 2010s there were dozens of research papers published in the scientific literature. Everything from animal studies and in-vitro research looking at the effects of kava on specific receptor types, and toxicity studies were conducted time and time again.

There were even a number of clinical trials involving two standardized kava extracts (WS 1490 and LI150) for anxiety, sleep, pain, depression, female reproductive health, and safety.

The evidence thus far is very promising, and with more research coming out debunking the early reports of liver toxicity, kava appears to be an incredibly useful herbal therapeutic for the modern era of high-stress and anxiety.

Where Could Research Improve?

At the moment we have a lot of research highlighting the safety profile of kava, as well as the application of kava for anxiety.

There are only a few studies at the moment for the muscle relaxant, sleep supportive, and pain-relieving effects of kava.

These are all areas that kava has a rich traditional use for and a lot of anecdotal reports suggesting its usefulness.

More clinical trials should be done to further understand the extent of kava for these applications.

Safety is one of the most important areas of research for any compound or herbal supplement.

In order for researchers to be approved to conduct a clinical trial, the preparation of kava they plan on using needs to be proven safe.

Fortunately, there’s a ton of research on the safety profile of kava — more so than almost any other herb aside from kratom or cannabis perhaps.

Some of this research suggests kava has liver toxic effects — including research from Australia, Switzerland, and New Caledonia. This lead to the banning of kava for a few years in Europe and Australia.

This research showed a paradox with the use of kava — known as the Pacific Kava Paradox — which basically highlighted the fact that traditional use of kava (made with water) didn’t cause any signs of liver toxicity, while alcoholic extracts of kava appeared to damage the liver.

For a while, it was thought alcohol was extracting toxic compounds from kava that water was unable to remove — thus making alcoholic extracts toxic, and water extracts safe. However, this research has since been disputed by several different research groups.

It’s believed the toxic effects found in these studies were the result of other medications and alcohol use, or adulterated or contaminated kava plants.

There have been a handful of large-scale safety studies, including a clinical trial involving the combination of kava and alcohol — all of which suggest kava lacks the associated liver-toxic side effects.

By far, most of the research involving kava is for its effects on anxiety — with the overwhelming conclusion of all of this research being positive.

Kava is well-known for its ability to relax the mind, and ease anxiety.

In vitro and animal research has helped highlight the potential mechanisms for this effect — which is thought to rely primarily on the GABA receptors, as well as some minor activity in the serotonin (5HT) and dopamine receptors.

There have been a few high-level research papers published on the use of kava for supporting sleep — including falling asleep and staying asleep.

A lot of this research looked at the effects of kava for sleep disturbances driven by anxiety, but there are a few that explored the role kava plays in the sleep quality and duration of healthy volunteers as well.

The majority of this research is positive — suggesting kava to be effective for helping users fall asleep and remain in deep restorative sleep for longer periods of time.

There’s a large body of research for kava — including everything from high-level Cochrane reviews and meta-analyses, all the way through various stages of clinical research, case reports, animal research, and in vitro cell culture research.

Let’s map out the landscape for kava research organized by the level of study — starting at the top.

A meta-analysis is a study that looks at a collection of randomized clinical trials. This is considered to be the best level of evidence for a particular effect of kava because it looks at the results of many tests, rather than just one.

Through meta-analysis, we can get a solid non-biased look at the effects of kava, and rule out any studies that don’t fit the criteria or have issues identified with how the study was conducted.

At the moment there are only three high-quality meta-analyses for kava. One was done way back in 1969, while the other was done 15 years ago in 2005.

The best one is the review of kava extracts for anxiety, which was published in the Cochrane Library — an organization known for performing the highest level of meta-analysis possible.

What Are Randomized Clinical Trials (RCTs)?

Randomized clinical trials are the highest level of clinical research.

In order to be considered double-blind, both the researchers performing the study, and the patients can’t know if they’re receiving the active medication (in this case kava extracts), or a placebo (usually a sugar-pill with similar color and taste to the kava extract).

Only some of the researchers who keep track of the study behind the scenes (no patient interaction) know which medications are active, and which are placebo.

The point of doing this is to rule out the placebo effect as much as possible from the study results.

Likewise, the interaction with the researcher can also skew these results. If the researcher knows a patient is getting a placebo or active medication, they may behave differently when handing out the pills. This could also affect the study outcome.

The randomization part of this research refers to the process patients were grouped — a computer software will randomly allocate patients to either the treatment group (kava) or the placebo group (sugar pills). This is again to limit the bias from researchers who may (unconsciously) place patients they believe will see improvement in the treatment group instead of fairly allocating to either group.

What Are Case-Control Studies?

Case-control studies look at the results of two different groups of people who had the same condition or symptoms but had different outcomes.

In the case of kava case-control studies, researchers looked at people who had a specific condition (usually anxiety) and placed those who used kava to treat their condition into one group, and people who did not into another to compare the differences.

What Are Non-Randomized or Single-Blinded Clinical Trials?

As mentioned in the section above on RCTs, randomization, and double-blinding of the researchers and study participants is the gold standard for clinical research. But it doesn’t mean this is the only way to run a clinical trial.

There are a lot of trials that simply can’t do double blinding for the study due to the form of treatment given (you can’t fake physiotherapy for example), or the budget for the study (double-blinding is expensive).

As a result, there are a lot of studies that use single blinding or non-randomization instead.

While these studies are still very valuable, they’re more open to dispute than an RCT. For this reason, I’ve separated this research from the section above.

What is Animal Research?

Animal research is exactly as it sounds — research done on animals to assess the outcome of kava for a particular effect.

Animal research is very abundant for all research topics because it’s required before any testing can be done on humans.

Animal studies are used in exploratory research to look for new applications of a compound, to assess the safety and toxicity, and to try and pinpoint a particular mechanism for an effect.

What is In Vitro Research?

In vitro is Latin for “behind glass”. it refers to lab testing using cell cultures or tissue samples from non-living organisms.

This kind of research has the lowest impact on providing evidence for something because it can easily be disputed.

To put this in perspective, imagine having a group of cancer cells in a test tube. You then dump acid in the test tube and watch as the cancer is killed. The outcome of the study could say that acid will kill cancer.

While this is true, it doesn’t apply to live humans. If we drink the acid, it may kill out cancer, but only after it kills us first. So this research has very little value to people looking for something to kill cancer cells.

Just because a study says a compound can do something in vitro, doesn’t mean this will actually apply in humans. There are a million other variables to take into account.

With that said, in vitro research has its place.

For kava, in vitro research helps to assess mechanisms of action for kavas effects. For example, we now know that at least part of the reason kava can help alleviate anxiety is because of its ability to interact with GABA. This is information we learned from studying the effects of GABAergic neurons isolated in a test tube.

What Are Chemical Analysis Studies?

This is the most basic level of research. Chemical analysis is done to map out the contents of a plant or compound. It involves a lot of high-performance liquid chromatography, gas chromatography, spectronomy, and various levels of chemical testing.

It’s thanks to this kind of research that we know about the structure and prevalence of the kavalactones in the kava plant.

If you’re interested in learning more about kava, but don’t want to read through all the scientific research published above, here are a few of my favorite textbooks and other books published on kava and other related plant medicines.