Home » Reviews » Wakacon Kava Review: Are they Going Out of Business?

Wakacon Kava Review: Are they Going Out of Business?

Wakacon is a kava company specializing in Fijian kava. They’re one of the only company’s we’ve seen offering traditional Fijian Lawena and Waka kava, which are made from different parts of the kava root.

In this review, we’ll cover Wakacon in detail — highlighting what the company sells, and why we believe the company is going out of business.

This is one of the cheapest kava vendors I’ve come across, but that doesn’t necessarily mean it’s the best value. The cost per mg, on average, is about 10 cents. Most high-grade kava root is between 13 to 15 cents per mg, with the top-shelf products or more rare offerings costing as much as 18 cents per mg.

This kava is weaker than the Fijian root powders from Root of Happiness or Squanch, but so there’s a tradeoff somewhere with these other brands in terms of value.

In general, the best value is going to come from the most potent kavas, even if they’re a little bit more expensive. You’ll need to use less kava to get the desired intensity of effects as you will with this brand.

Wakacon only has two products — both from the same crop.

The waka is the lateral roots, while the lawena is the basal root. It’s common to separate the two parts of the roots in Fiji, but most other cultures will mix the two roots together.

While the lineup from Wakacon follows traditional Fijian kava preparation methods, most kava vendors offer other root powders or additional categories of kava products to consider — including tinctures, teas, or concentrates.

I would consider this brand one of the least potent compared to the other brands offered on this list — but not too weak that it isn’t worth using. The low cost of this powder makes it a good option for new users or people who have a low tolerance. When using this brand I add about 20% extra to account for the lower potency.

The waka powder is the stronger option between the two. The tradeoff is that it has a much more bitter taste.

Wakacon primarily sells its products on Amazon. They have very little in the form of a customer service team. We were unable to get in touch with the company through their website directly but did manage to hear back through the Amazon seller page. The responses we got were very scripted.

There isn’t much information available about the company, and several of our attempts to reach the company by email went unanswered — indicating that this company may be soon going out of business.

When you go to the Wakacon website you’re immediately redirected to Amazon to make the order. There are also quite a few of Wakacon’s kava accessories (like coconut cups and bowls) that are no longer in stock.

Taking a closer look, Wakacon seemed to have been popular in late 2016 until the end of 2018 — but has gradually been tapering off since then. Below is a screenshot of the website traffic over the past couple of years.

Lawena refers specifically to kava made from the heart root or crown — which is the main thick rootstock that sits just below the surface of the soil. Lateral roots are the webs of roots that spread outward from the crown root.

It’s traditional to separate the crown root from the lateral root in Fiji. No other kava drinking culture in the pacific makes this distinction and will mix both the crown roots and lateral roots together before drinking.

In general, lawena (crown root) kavas have fewer kavalactones by weight. This gives them a milder effect profile and milder flavor than waka (lateral root) kavas.

I love how Wakacon follows the Fijian kava tradition by separating the lateral and crown roots. This gives users the ability to choose between the slight differences in effect profiles between these roots.

If you’re looking for gentler kava to share with friends and family — this Lawena kava is an excellent option. It’s easier on the tastebuds and has more of a subtle heady effect than the Waka kava option.

Fijian Waka kava is made using the lateral roots of the kava plant only. These roots hit harder than Lawena roots, have a much more potent flavor, and appear darker in color.

Most experienced kava drinkers will probably like this option better for its stronger effect profile, but with that comes slightly higher chances of experiencing side effects. For this particular kava, the most common side effect is going to be lightheadedness or dizziness. This kava is much less nauseating than other options — especially for kava with such potent effects.

Novice drinkers or people sensitive to kava may want to go with the gentler Lawena option — however, both will ultimately offer a similar set of effects and come from the same kava plants. 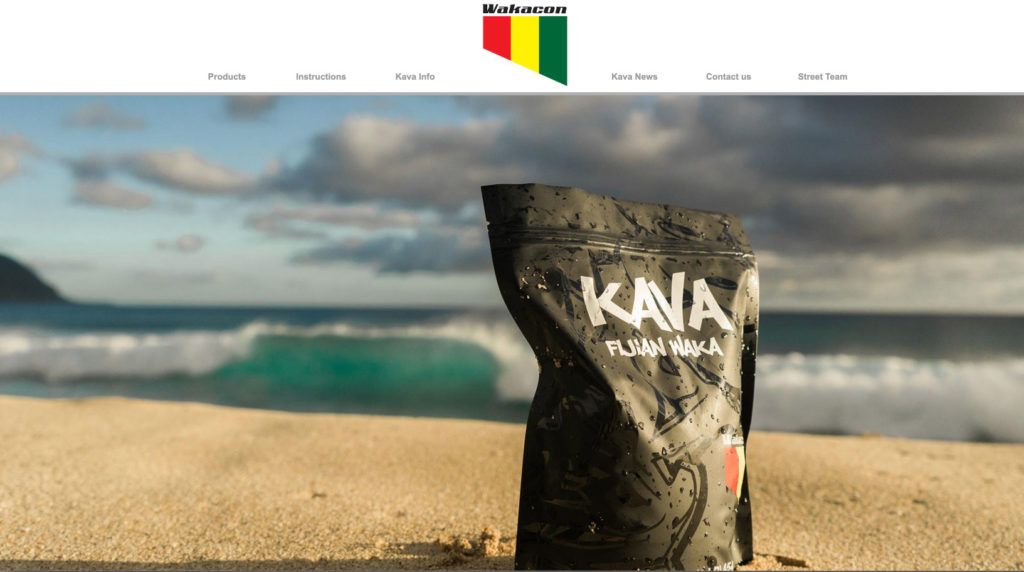 Wakacon offers two traditional Fijian kava options — Waka and Lawena. Both come from the same plant, but the lateral and crown roots are separated.

Unfortunately, there really isn’t much information about this company. It appears the company was once one of the more prominent company’s in the industry, but has since moved their product stock to Amazon, and appears to have stopped updating their social profiles in late 2018.

Although we enjoy drinking both of the kava options Wakacon offers, and value the effort the company put in to get each batch tested by the University of the South Pacific, we’re not sure this company will be around much longer. They may be simply waiting to sell out the rest of their stock before shutting their doors for good.