Home » Side Effects » What is Kava Dermopathy (Kanikani) — Is It Reversible?

What is Kava Dermopathy (Kanikani) — Is It Reversible? 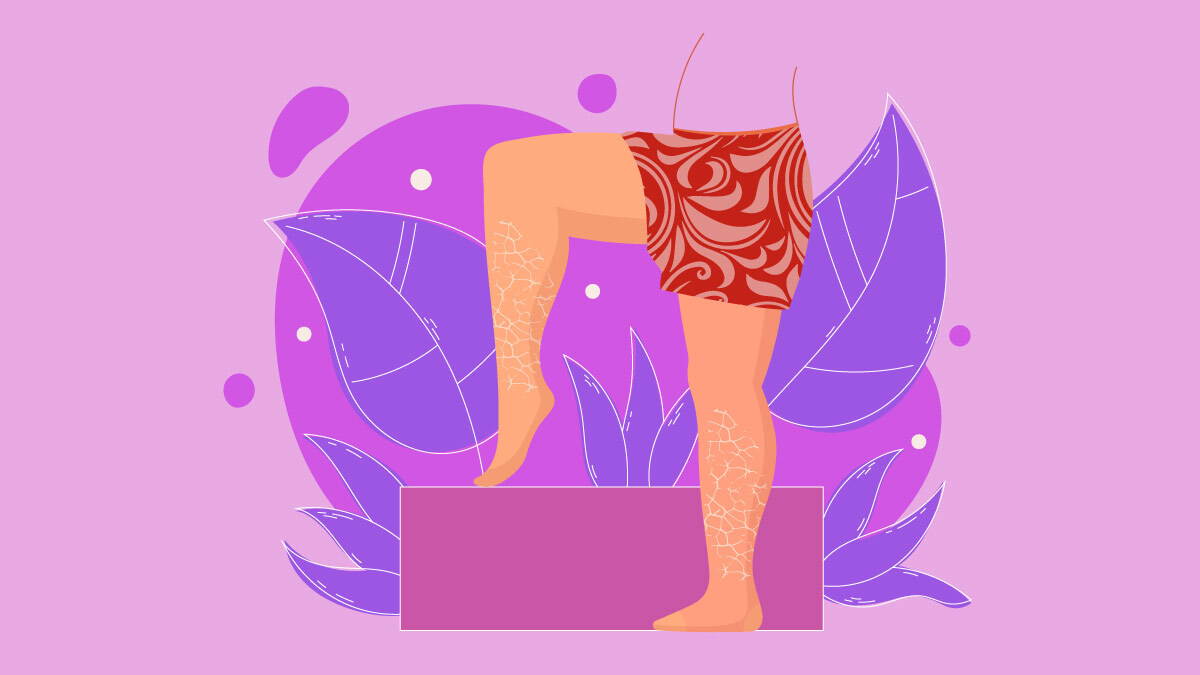 Kava dermopathy is one of the potential side effects of kava. It’s only found in people who consume large quantities of kava (Piper methysticum) over long periods of time.

This condition results in the formation of thick, dry, scaly skin on the arms and torso. Symptoms go away entirely by ceasing all consumption or significantly reducing kava intake.

Here’s everything you need to know about kava dermopathy and what to do if it happens to you.

What is Kava Dermopathy?

Heavy, long-term kava consumption can lead to a condition Fijian locals call kanikani. In other regions, it’s referred to as crocodile skin or kava ichthyosis.

The condition involves the formation of thick, dry, scaly patches to form on the arms, legs, and torso.

Kava dermopathy is fairly well-known in parts of the world, where it’s common to drink large amounts of kava on a near-daily basis. It was even considered a sign of nobility in the past when only the leaders of the group were allowed to drink kava.

There are a few theories about what causes the condition.

The predominant theory is that some people have a genetic defect in the liver that leads to ichthyosis of the skin.

Other theories include allergic reactions, persistent photosensitivity, niacin deficiencies, or accumulation of phytochemicals from kava in the skin.

Whatever the cause, kava dermopathy only forms in people who drink a lot of kava over long periods of time. It doesn’t happen after just one session or even several dozen sessions. It takes years of near-daily use for kava dermopathy to set in. 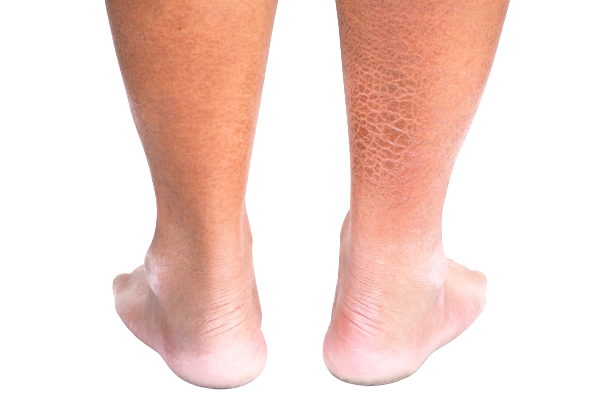 How Common is Kava Dermopathy?

Kava dermopathy is common on the islands of Fiji, where kava consumption among the general public is very high.

Early ethnobotanists and explorers traveling to Fiji would even look for this condition for signs of heavy kava use in a given community.

An older study (1994) reported the prevalence of the condition in Fijian kava drinkers to be around 45% in “regular users” and 78% in heavy consumers [2].

The first sign is the formation of powdery dry skin — usually on the arms and upper back. Over time, the condition will worsen, leading to keratosis or dry scaly formations on the skin. The rash will continue to spread along the arms, back, and feet.

The progression of this condition takes several months or years, depending on the individual and how much kava they’re drinking.

Once kava consumption is stopped or heavily reduced, the condition will go away on its own.

Just as it took a long time for the condition to present — it will take a while for it to clear up as well. Don’t expect kava dermopathy to go away overnight once you stop using kava. It can take several weeks or months to go away completely.

Most people who get the condition in Fiji don’t seek treatment. They may apply a moisturizer to help the lesions heal faster and alleviate itchiness or discomfort.

There are no specific treatment protocols for this condition aside from symptomatic support. A good skin moisturizer or CBD cream is usually enough to alleviate any itchiness that accompanies the condition.

Scientists still don’t fully understand what is actually causing kava dermopathy. There are several prominent theories, but nothing has been confirmed.

There are a few different types of kava dermopathy reported in the medical literature. None of them have specific names, but there are key differences with the types of dermopathy some patients are presenting with.

Here are some of the leading theories for what causes kava dermopathy:

1. Functional Defect in One or More CYP450 Isoenzymes

The leading theory for the underlying cause of kava dermopathy is a defect in one or more of the CYP450 isoenzymes in the liver. These enzymes are responsible for metabolizing just about everything that enters the body — including hormones, medications, and herbs like kava.

A condition called lamellar ichthyosis type 3 (LI3) shares similar scaly, cracking skin symptoms as kava dermopathy. This condition is known to be linked to a functional defect of the CYP4F22 isoenzyme [4]. This enzyme is involved with the metabolism of arachidonic acid, which is an important component in the cell membranes of the keratinocytes that make up the skin, as well as separate components needed for keeping the skin cells hydrated.

Experimental studies have shown that kavalactones may inhibit certain CYP450 enzymes that resemble CYP4F22, such as CYP2C9 or CYP4A11, that play a similar role in arachidonic acid metabolism [6].

A case report published in 2000 suggested a patient using kava presented with erythema (skin rash caused by damaged blood vessels) after using kava [3]. It’s possible that long-term mast cell activation from kava could lead to damage in the capillaries in the outer layers of skin.

Some reports suggest a lack of erythema as a distinguishing factor of kava dermopathy — so if this is a cause, it’s certainly not the only cause for the condition.

3. Accumulation of Kavalactones in the Skin

A case report published in 2018 reported a female patient experiencing burning, itchy skin eruptions forming on her arms, face, and back [5]. She also suffered from a fever, sore throat, and difficulty breathing. She had reportedly been drinking kava tea every day, and after changing to a new brand that had double the dose of kavalactones, she started to experience symptoms.

The report suggested that kavalactones (AKA kavapyrones) may have accumulated in the patient’s skin. Kavalactones are fat-soluble, which allows them to accumulate in fatty tissues of the body — such as the skin and sebaceous glands. This eventually led to an inflammatory response, causing the skin reaction she presented with.

This case report is interesting and suggests another potential mechanism for kava dermopathy — however, the symptoms appeared to be different from what’s more commonly found in kava dermopathy patients (kanikani).

This theory suggests that kava exerts a photosensitizing effect on the skin — causing the skin to burn or become damaged more easily from UV light.

This has not been confirmed, but there are several sources that note the symptoms are worse in areas of the body that are normally exposed to the sun — such as the upper back, arms, and tops of the feet.

This theory suggests kava could interfere with tryptophan metabolism, which could then cause a problem with niacin production.

Niacin plays an important role in protecting the skin from the harmful effects of the sun. Deficiencies in niacin can lead to a condition called pellagra which involves dryness and scaling of the skin.

However, pellagra also involves neurological deficits and can be fatal. The type of scaling involved with the skin has a different appearance than most kava dermopathy sufferers experience as well.

How to Prevent Kava Dermopathy

Kava dermopathy is considered completely reversible by ceasing kava use altogether or significantly cutting back.

This condition is most common in people who consume more than 310 mg of kavalactones per day every day. The less kava you drink, the less likely this condition is to present itself.

The average dose of kava in Western culture is between 10 and 50 g of kava per day — which works out to around 140 to 300 mg of kavalactones.

Related: What’s the dose of kava?

If you’re on the high-end of this range, it’s wise to take periodic breaks every few days to avoid the development of dermopathy. If you notice the early signs, such as a powdery, dry formation on the arms and back — it’s wise to cut back on kava substantially until symptoms subside.

Key Takeaways: What is Kava Dermopathy?

Kava dermopathy is a condition that only affects frequent kava drinkers. It used to be a sign of nobility on the islands of Fiji because only the chiefs and village leaders had the privilege of being able to drink enough kava to cause the condition.

Now, kava is readily available throughout the community, as well as internationally around the world.

This condition involves the formation of a rough, dry patch of skin resembling eczema or ichthyosis. It appears gradually over long periods of time and goes away once kava consumption is stopped.

While there are several prominent theories as to what’s causing this condition, scientists are still seeking to understand exactly what’s going on. The leading theory is that kava dermopathy is caused by a defect in the CYP450 enzymes, which is further aggravated by the inhibitory effects of certain kavalactones.

Other types of skin conditions can also develop with frequent kava consumption that are more related to allergies or an accumulation of kavalactones in the skin.