Botany of the Kava Plant 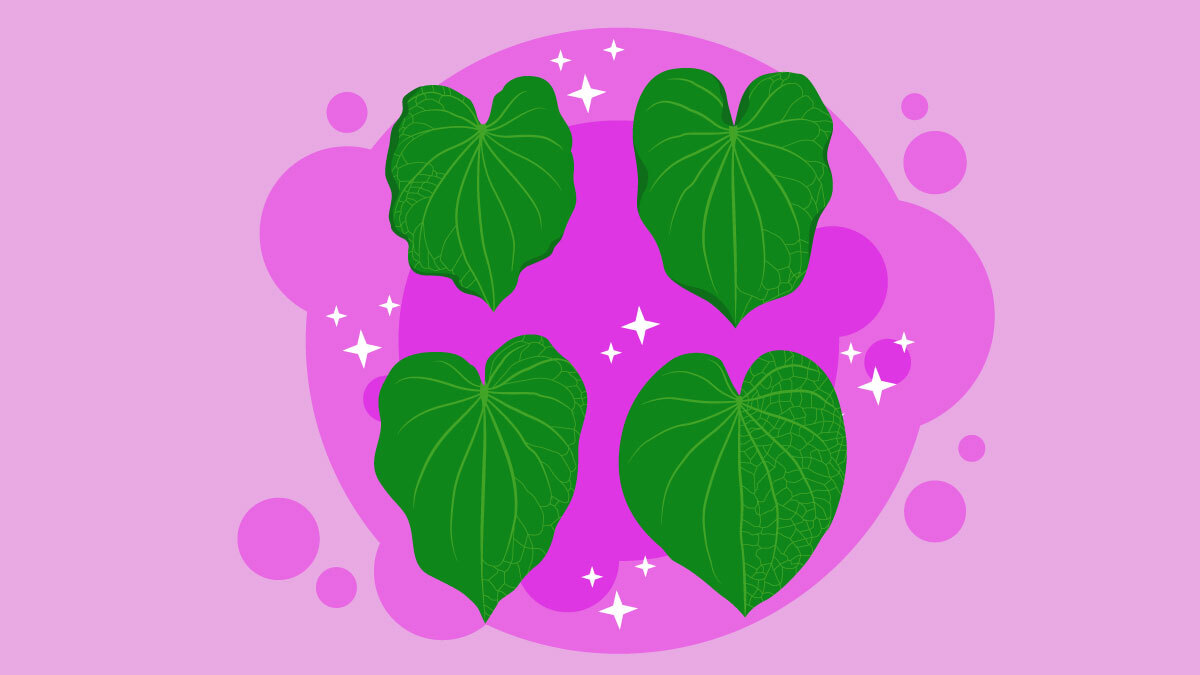 Kava (Piper methysticum) is a dioecious tropical plant species from the Pacific islands. It’s best known for its anxiolytic, sedative, and euphoric qualities.

Kava root is rich in a group of compounds aptly named — kavalactones. These unique chemicals are what give kava its medicinal effects.

The botany of kava is an interesting topic because this really isn’t your average plant — it produces flowers, but no seeds. The kava plant propagates itself by sending off new shoots from the root of the plant (vegetative propagation). This essentially means every new kava plant is a clone of its parent.

In this article, we cover everything you need to know about kava botany — including the growth pattern of different cultivars, the origin and distribution of the plant, and a brief guide on how new kava plants are made from clones.

Kava has some interesting growth characteristics.

For starters, the kava plant doesn’t produce any seeds, and can only form new plants from cuttings — which are essentially a clone of the original plant.

There are a few theories as to why kava can’t reproduce sexually like other plants, but the best theory has to do with the size of the chromosomes of Piper methysticum — which are reported to be around 5 times larger than ancestral cultivars. Even a 50% difference in chromosome size can make it difficult to form gametes (pollen or ovaries).

It’s unclear if kava was always sterile, or if it became sterile as a result of hundreds of years of cloning plants as a means of propagation.

Today, the only way to create a new kava plant is to take a clone from another kava root.

Even though kava plants are all clones of each other, there’s a surprising amount of variation in the morphology (growth characteristics) of different kava cultivars. Stems shape/size, leaf shape/color, and general growth patterns can all vary depending on the cultivar.

We use a system used to catalog the growth habits of different kava strains, as developed by renowned kava researchers Lebot & Levesque.

Each kava plant is given a morphology code, which refers to specific growth characteristics:

The above ground growth pattern of kava classifies it as a shrub. It will grow to a maximum of 2 meters tall (6.5 feet). Once it reaches this height, the plant will continue to grow, but focuses the growth on thickening the stalks, and growing additional stalks instead of growing taller.

In order to assess the general appearance of the kava plant, we have to take a step back and look at the entire plant as a whole.

This is an assessment of the plant on a macro level — which is usually the first thing you’ll notice.

Depending on the cultivar, kava can have a few different options for its general appearance:

The next factor to look at is the color of the stem. There are a couple of different colors kava stems can have:

An internode is the space between where a leaf branches off from the main stalk. There are a few differentiating factors on this region of the plant to compare:

Most kava leaves are either light green or dark green, but they can also have a purple tinge to them.

A lamina edge refers to the outside edge or margin of a leaf. There are a few patterns kava leaves can have that differentiate them from other cultivars:

Pubescence in plants refers to the presence of small hairs on the leaves. Some cultivars of kava have these leaf hairs, others do not.

The last category for assessing kava morphology is the internode shape. There are three different options here:

Although kava roots aren’t included in the morphology coding developed by Lebot and Levesque, I’ll mention a few features about this part of the plant since this is where all the benefits of kava come from.

The root is the part of the plant we end up using, and the part that contains the majority of the active kavalactones.

Kava relies on its roots to spread out and produce new plants.

The roots are thick and store a lot of energy for the plant in the form of sugars and lactones. These roots can grow up to 60 cm (2 feet) below the ground.

Since kava only grows in areas that receive a lot of rain and prefers loose, airy soils, having the roots reach deep below the soil gives it a lot of surface area to absorb water. This helps the plant grow at a very fast rate, and has the added advantage of securing the plant firmly to the soil. Even hurricane-force winds have a hard time ripping kava plants from the soil.

There are two sections of the root that are important to be aware of:

Despite producing no seeds, kava will develop flowers every now and then.

The male flowers are auxiliary, greenish-white spikes that can be up to 15 cm (6 inches) long.

Female flowers are exceptionally rare, but this isn’t why the plant doesn’t produce any seeds. Even hand-pollinated female kava flowers fail to produce viable seeds. Female flowers look very similar to male flowers, but are slightly smaller in size.

All kava flowers will start out a bright white color, and gradually turn orange as they mature. Flowers can last up to a few weeks at a time.

There are two main types of kava from a user perspective:

Noble kava is much more popular because it has far milder side effects and more of the beneficial effects of kava. These plants are primarily from the Piper methysticum species. Just about anywhere you’re likely to find kava available online will be selling noble kava strains.

Tudei kava is reserved for very experienced users and herbalists only. These strains are much more likely to produce negative side effects — sometimes lasting up to two days (hence the name tudei). These cultivars can be either Piper methysticum or Piper wichmannii.

Kava grows throughout the many islands of the pacific ocean, including:

There’s a lot of debate around where kava first originated. The fact that the plant can only be propagated from cuttings of other plants means it’s extremely unlikely to have spread to new islands in the pacific ocean on its own. Instead, it was carried to different islands by indigenous people living in the region as they spread out to find new lands to colonize.

Researchers have tried to trace back the origin of kava by following the expansion of humans in the pacific islands, and through genetic testing of different kava cultivars, and other members of the Piperaceae family.

It’s most likely that kava first originated in Vanuatu after a random genetic mutation caused a split from the Piper whichmannii species.

Since Piper wichmannii was already being used in the area as medicine, it’s likely that after someone discovered and tried the new plant it was well-liked because of its milder side effects. Someone must have eventually decided to make a cutting of this plant to cultivate more which ultimately lead to the kava we have today.

Kava likes to grow in moist tropical soils with plenty of rainfall and airy soil. You’ll most likely find kava thriving in place where rainfall exceeds 2000 mm per year (78 inches).

Kava is considered an understory crop, which means it’s adapted to growing on the ground floor of dense tropical rainforests. In these places little light reaches the ground floor as the large overcrowded trees soak up most of the sunlight. As a result of this adaptation, kava is well suited to low-light environments, and may even find it difficult to thrive if given too much light.

Cultivating kava requires a specific growing environment. Most of the kava we use today is harvested from the pacific islands, including Hawaii, Vanuatu, Fiji, and Samoa.

Kava farms will usually farm other plants alongside kava, such as banana trees to provide shading for the kava plants and make better use of the land with multiple crop types.

Growing kava is risky, as it takes a minimum of four years to get viable roots. Plants younger than 4 years don’t have enough kavalactone content to get a good market value.

Once harvested, each plant will produce around 50 kg (110 lbs) of root once harvested — but this can vary depending on the cultivar and environment in which the plant was grown.

Can I Grow My Own Kava Plant?

Kava can be grown at home in a controlled growing environment but requires a lot of care and attention to details like temperature, water levels, and ambient humidity. Without high temperature, high humidity, low light, and plenty of water, kava will fail to thrive.

You’ll need to invest some time and money into a growing environment that allows you to maintain the ideal conditions for the plant to thrive. This could involve a professional grow tent, clear storage container, aquarium, or an area in the house with a lot of humidity.

Growing kava is easiest in tropical areas of the world that already have high humidity and ambient temperatures.

Kava Propagation: How To Make New Kava Plants From Cuttings

As we’ve already discussed, kava does not reproduce sexually. This means we have to use other methods to create new plants.

The only way to grow a new kava plant is to take a chunk of another plant (such as a piece of stem or root), and propagate it vegetatively — which is essentially like making a clone of another plant.

Plants have a special ability called totipotency — which means a plant cell can differentiate and change itself into a different type of cell. Root cells can become stalk or leaf cells, and vice-versa.

This ability allows cultivators to take a piece of root, leaf, or salk, and place it in ideal growing conditions until it begins growing more roots, stalks, and leaves — eventually turning into another complete kava plant. The new plant would be a genetically-identical clone of the first plant because it shares the exact same DNA.

Kava is an intriguing plant for botanists for a few reasons.

It’s one of the only plants in the world that continues to thrive without producing any viable seeds. All kava plants are technically a clone of each other — yet there’s still a great deal of diversity in morphological features of different kava cultivars.

Thanks to the tireless work of two researchers in the late 80s (Lebot and Levesque), we have a system to catalog kava plants of different morphological, and chemical profiles.

If you’re interested in growing a kava plant of your own, you’ll need to order some root cuttings, and set up a growing environment that can sustain high temperatures, high ambient humidity, and low-light.