Kava Duration — How Long Does It Take & How Long Will it Last? 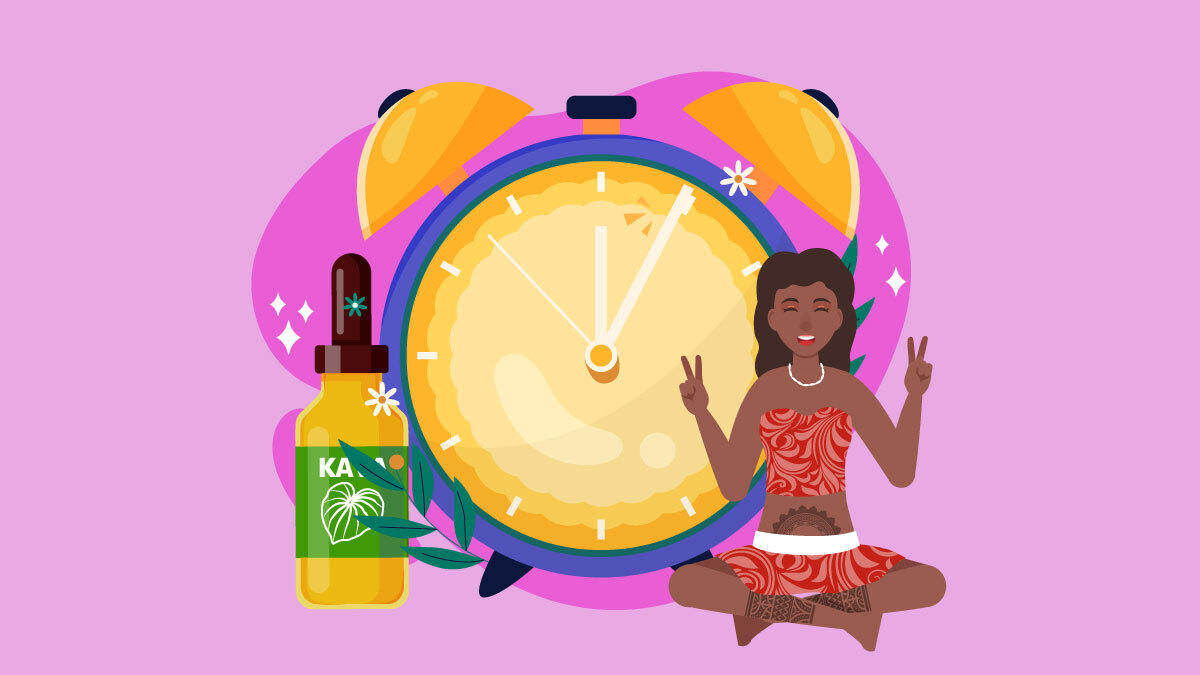 In this article, we’ll discuss everything you need to know about the duration of kava. We’ll cover how long it takes for kava to work, what factors can either slow-down or speed-up the onset of kava effects.

Then we’ll finish with some information on how long kava will last and some tips you can apply to make kava last longer.

How Long Does It Take For Kava To Work

There are many factors that can affect the amount of time it takes to feel the effects of kava on the body.

In general, it takes about 15 minutes for kava to start having any effect — in some cases, it can take as long as 30 minutes for the first wave of effects.

Every kava is different, but in general, the euphoric effects will appear first, followed by the relaxing or sedative effects next. Some kava begins to take effect before you finish the first cup (shell), others won’t hit you until the second or even third cup of kava.

The first sensations you’ll feel when drinking kava tea is a tingling or numbing of the lips and tongue, and it happens almost right away. This is caused by the active kavalactones in the tea. The stronger the kava, the stronger the numbing sensation.

The euphoric and energizing effects of kava are the first real effects to appear. This will usually happen quickly — within about the first 30 minutes after drinking.

You may feel a wave of relaxation, feel carefree, and mild euphoria may sweep over you. Many experienced drinkers will agree that kava onset usually begins in the head and works its way down to the rest of the body as the effects intensify.

After the euphoric and energizing effects begin to appear, they’ll continue to build up until around the 2 hour mark. Depending on how much kava you consume, this effect can be quite intense. Many will feel a high degree of euphoria and a sense of wellbeing. You will feel talkative and creative, yet relaxed and carefree. You may or may not find the motivation to follow through with any of this new found creativity.

Even heavy kavas will feel relatively heady in the first hour after drinking your first shell — however, these strains transition into the body high much sooner than a true heady kava strain.

As time goes on, the effects on the body become more prominent. The muscles relax and you may start to feel heavy — like you’re sinking into the chair or floor.

This is when the heavy effects of kava begin to poke through. Depending on how much kava you took, and what kind, you may even drift off into sleep before the 6-hour mark is up.

Why do the effects of kava come on more slowly for some people compared to others?

There are many different factors that affect kava’s onset timing. Let’s cover some of these factors in more detail.

Much like drinking alcohol or coffee, if you take kava on an empty stomach you’ll feel the effects sooner. This is because the contents of the digestive tract are in competition with each other for absorption. If there’s food in the stomach, it will slow the absorption of kavalactones into the bloodstream — therefore prolonging the onset time.

2. Other Supplements or Medications

Kava onset may also be affected by other supplements or medications you’re taking. Some medications will compete for the same absorption pathways as kava, thus slowing down absorption and lengthening the amount of time needed for kava to onset.

Other medications will affect absorption in the gut directly. Supplements such as slippery elm or psyllium husk can block the absorption of kava in the digestive tract, while other supplements can dramatically increase the rate of absorption — causing a shorter onset of effects.

3. The Grind of the Kava

The finer the grind, the faster the onset. This is part of the reason why micronized kava is preferred to coarser grinds of kava.

The fine grind means kava has a much larger surface area, allowing more of the active kavalactones to mix with the water, increasing the amount of kava that comes in contact with the absorptive lining in the digestive tract.

This ultimately means more kavalactones enter the bloodstream in a given amount of time — producing a faster onset of effects.

4. The Form of Kava You’re Taking

How is Kava Absorbed?

The biggest factor affecting the onset of kava is the absorption of the active kavalactones in the digestive tract. So how does the body absorb kava?

The kavalactones are fat-soluble substances — which means they will dissolve in fats and solvents like alcohol but not in water.

The fat-soluble absorption pathway is much slower than the water-soluble pathway. This is because the blood is water-based, so compounds that dissolve easily in water can move directly from the digestive tract to the bloodstream without any problems.

Fat-soluble compounds, on the other hand, need to first dissolve into a fatty substance in the body — which is the lymph tissue. The kavalactones are absorbed by the lining of the digestive tract and moved into the lymph system — which runs alongside the cardiovascular system.

From here, the lymph and dissolved kavalactones are moved up towards the heart before being mixed in with the blood with the help of specialized proteins that allow fatty substances to dissolve with the water-based blood.

This process takes time because lymph fluid travels slowly through the body.

Lymph isn’t pumped by the heart and relies on a series of one-way valves to move around the body. This means it can take a few minutes for kavalactones to move from the lymph system in the digestive tract to the systemic circulation (which is needed for the kavalactones to take effect).

How Long Does Kava Last?

Most kava will last about 4–6 hours on its own. However, if you continue to drink kava throughout the evening, the effects can last much longer.

Similar to kava’s onset, the duration of effects relies on a wide range of  factors and is different for everybody.

Most people find the euphoric effects of kava (the heady effects) will last about 2–4 hours, while the sleep supportive, muscle relaxant, anti-anxiety, and stress-reduction effects (heavy effects) tend to last much longer — closer to 6 or even 8 hours.

The onset time for kava’s effects can vary significantly from one person to the next and even from one day to another. For example, the amount, and type of food in the stomach can increase or delay the onset of effects.

Other factors such as the type and grind of kava you’re using and the interaction with other supplements or medications you’re taking can all affect the amount of time it takes for kava to yield its effects.

Most people experience the effects of kava somewhere between 7 and 30 minutes after drinking kava tea.