Does Kava Show Up on Drug Tests? 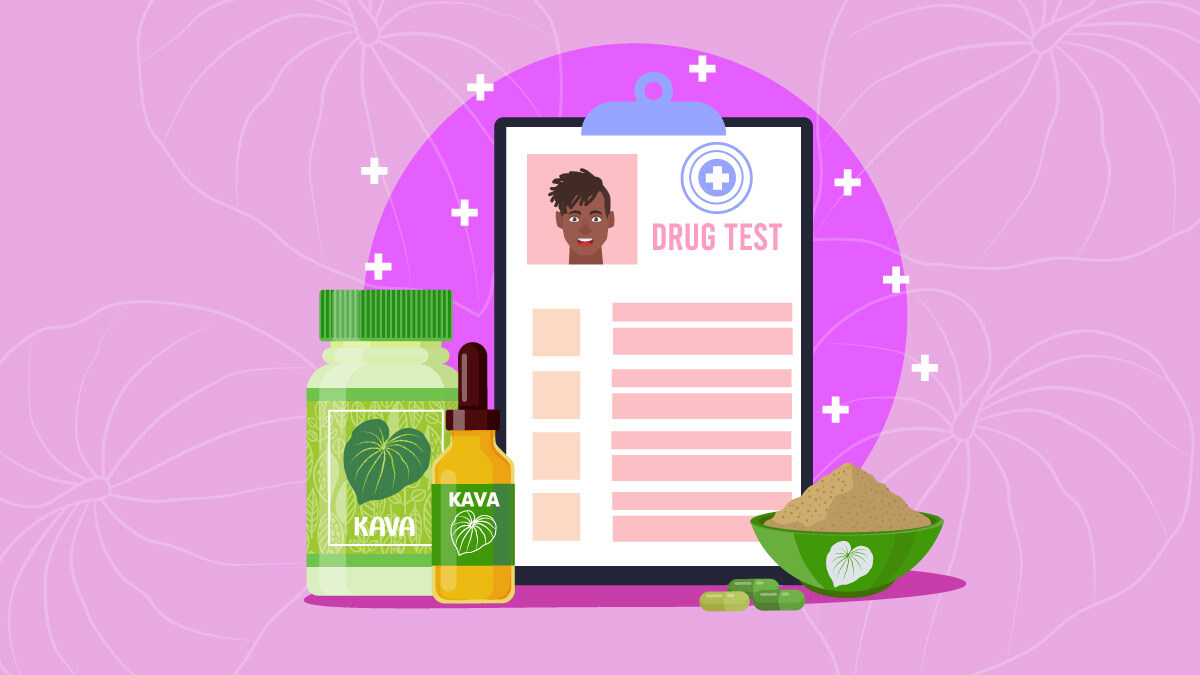 Kava is a popular herbal supplement for its ability to support anxiety, boost creativity, relax the muscles, and help us achieve better sleep.

Some people use kava for its euphoric and calming effects — sometimes even drinking enough to feel a little bit intoxicated or high.

These effects have some people questioning whether or not kava will make them fail a drug test. Do professional sports organizations ban kava use? Will your new job be searching for the active components of kava in the upcoming drug test?

The short answer is no — kava will not make you fail a drug test — but only because nobody is looking for it.

If an organization wanted to check for kava in the urine, blood, or hair, they can find it.

In this article, we’ll dig deep into how drug testing works and why kava isn’t unlikely to lead to a failure on your next drug test.

Is Kava Included in Drug Testing?

Drug tests like reagent testing, immuno-assays, gas chromatography, and mass spectronomy could, in theory, discover the presence of kava’s active ingredients in the blood or urine.

The question is whether or not companies or athletic organizations actually test for these chemicals or not.

These days, corporate drug testing is usually done to tick a box off for insurance or regulatory reasons. Careers involving the operation of heavy machinery, involvement with children, or health professionals often have to pass drug tests to ensure they’re level of attention isn’t inhibited by anything as preventable as illicit drug use.

There are no regulations currently in place requiring companies to test for kava, and therefore little reason for a company to spend money testing for it.

A lot of this comes down to the fact that kava is rarely a drug of abuse in Western culture, and isn’t used by the general public on a regular basis to the same extent as drugs like opiates or alcohol.

Perhaps if kava became more commonplace around the world, and we started to see people abusing kava more often would it be on the radar of corporate drug testers. Until then, there’s very little chance the company you work for will pay any attention to kava on a mass spectronomy test or even look for kava compounds on standard reagent or immunoassay drug tests.

WADA provides a public list of prohibited chemicals — which doesn’t include any mention of kava or its active ingredients. Local anti-doping agencies use the prohibited list to track and list public sanctions on failed athletes in their respective countries.

The fact is that kava simply isn’t viewed as a performance-enhancement drug and isn’t considered illegal in most parts of the world — so there’s no reason to test athletes for it in a standard drug test.

Why Does Drug Testing Exist?

Henry Ford — the founder of the Ford motor company and one of the best business moguls of all time — was famous for his strict “sober and moral” philosophy when it came to his employees. He had no tolerance for employees who would spend their off-hours drinking alcohol or using drugs because he felt it affected their ability to perform at work.

Back then, Ford didn’t have the advantage of chemical drug testing, so he would hire people to follow his employee’s home to monitor their habits. If they were found to be using drugs or alcohol, they would be let go.

Today, the motivations for companies and government agencies to drug test their employees are the same — they fear the use of drugs and alcohol may hinder the performance of their employees on the job. The difference today is that we now have the ability to test for drugs using technology — rather than having to follow people home to see what they’re up to.

Other organizations have different motivations for drug testing. Organized sports and eSports for example, will test participants to ensure they’re not using performance-enhancing drugs to gain an unfair advantage over the competition.

There are many different organizations governing sporting events, each one setting their own rules around which drugs to test for — or if testing is even done at all.

Most of these leagues model their drug panels off the advice of the World Anti-Doping Agency (WADA).

WADA offers an in-depth list of banned drugs to test for — which includes illicit drugs, anabolic steroids, prescription meds, over the counter drugs, and even a couple of herbal supplements.

There are plenty of other anti-doping organizations — each with their own list of prohibited substances, though most are nearly identical to WADA’s list.

How Does Drug Testing Work?

The first drug test was made in 1966 by Manfred Donike. He used a technique called gas chromatography to detect anabolic steroids in urine.

Today, Donike’s technique is still used, along with several other forms of testing to search for different kinds of chemicals in the urine, hair, and blood. Each type of test comes with its own set of pros and cons, costs, and levels of precision.

Let’s cover a few of these tests in more detail:

Otherwise known as GC testing, this was the most common form of drug testing for several decades. It involves converting urine or blood into a volatile vapor. This vapor is then forced through a long, thin tube.

On the other side of this tube is a special UV sensor designed to detect the density of the vapor coming out the other end. As the vapor travels through the tube, the smaller particles with less density float to the to

The UV sensor measures how much of each density comes out the other end. This data is analyzed and compared to a database of drug tests to find commonalities and confirm the presence of certain drugs.

This test is best coupled with other forms of drug testing to help rule out false-positives [1] — such as mass spectronomy or immuno-assays.

Kavalactones may show up on a gas chromatography test.

Immunoassays are a different type of test that looks for antibodies produced by the body in response to a drug — rather than for the drug itself.

Antibodies are like a special tag made by the immune cells to help it recognize a foreign compound in the bloodstream. Immuno-assays can detect antigens specific to drugs or other chemicals.

These tests can pick up drug use even if the compound is no longer in the system. Antibodies can remain in the bloodstream for weeks or months after using the drug.

These tests are inexpensive, fast, and fairly accurate. However, in order to rule out false positives, this test should be combined with another form of testing, like mass spectronomy or gas chromatography or simply run twice in a row.

This is a common type of test used for corporate drug testing due to its low cost.

A good example of an immunoassay test is an at-home pregnancy test — which looks for anti-hCG antibodies produced in response to a growing fetus.

Immuno assays can only be used to find something if you look for it specifically — you can’t do an exploratory scan to see what shows up. If the compound isn’t on the list of chemicals the test is designed to look for, it won’t show up at all.

Kavalactones will only show up on an immunoassay drug test if the test is designed to look for antibodies made in response to kavalactones directly.

Mass spectronomy is considered the gold standard when it comes to drug testing at a professional level. It’s expensive but extremely accurate.

This test involves blowing apart molecules in blood or urine and sending it down a magnetic tube detector. Every molecule that travels down this tube has a unique “fingerprint”.

Mass spectronomy is frequently used in research to explore the chemical makeup of plant, insect, and animal samples. The result will display a summary of the compounds in the sample — so drug testers using this type of analysis can find compounds they didn’t know to look for.

Kavalactones will show up on a mass spectronomy test.

This is the cheapest, most common form of drug testing.

This type of test won’t show how much of a compound is in the urine but will detect whether it’s present or not.

These tests are made using a special set of chemicals that will react and change color if exposed to specific chemicals. Each test can only look for one type of compound, and won’t be able to detect other drugs or chemicals.

Reagent tests usually come in the form of a cardboard strip covered in sections of chemicals. You dip the strip in a urine sample and wait a few minutes to see if the color changes to confirm the presence of drugs.

This is the type of test you’ll find in at-home drug tests, and will only be able to find a defined set of drugs or compounds.

Reagent testing can only find kavalactones if the test was specifically designed to test for them. Although reagents for kavalactones exist these tests are only really used in scientific research for kavalactone metabolism and for testing product quality.

Summary: Will Kava Show Up On A Drug Test?

Kava is becoming popular around the world for its role in settling the nervous system, promoting muscle relaxation and recovery, improving our sleep, and producing a feeling of euphoria and wellbeing.

Many athletes, executives, corporate employees, and creative freelancers use kava to boost their performance at work — namely by reducing symptoms of anxiety and promoting a better night’s sleep.

The question as to whether kava will make you fail a drug test has two answers:

Yes, kava can show up on a drug test — anything can. But it’s not likely to make you fail.

Why? The answer is because nobody cares to look for it. There’s simply no reason to penalize athletes or spend money testing corporate employees for a supplement that isn’t heavily associated with abuse or offer any direct athletic enhancement.

The benefits of kava on performance are indirect — stemming from its ability to help us unwind and rest — something plenty of other supplements offer in their own way as well.