Home » Health » What’s The Difference Between Kava & Damiana? Can They Be Mixed?

What’s The Difference Between Kava & Damiana? Can They Be Mixed? 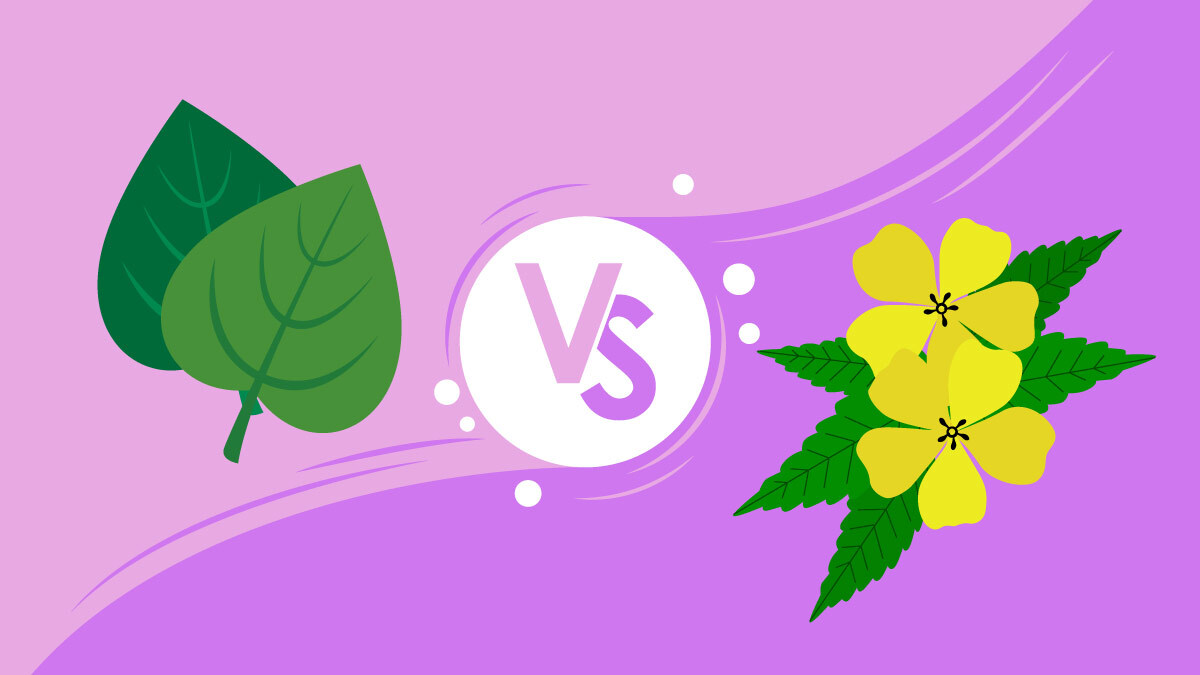 Kava and damiana are both traditional herbs used to promote relaxation and sleep. They have a lot in common despite having almost no direct relation to each other.

Some people are mixing damiana and kava together for their combined effects.

In this article, we’ll discuss what kava and damiana are, how they’re different, and why people are mixing these two herbs together.

This herb originates from the many islands scattered across the pacific ocean such as Vanuatu, Samoa, Fiji, and Hawaii. Here, indigenous cultures would grind the root into a pulp, and mix with water to produce a strong, bitter infusion. The beverage would be consumed in groups during ceremonies or social gatherings.

Kava has a powerful set of effects. It relaxes the muscles, eases the mind from anxiety, and gradually helps us drift us off to sleep.

In high doses, kava can produce a sensation similar to intoxication from alcohol, but without compromising our clarity of thought. Instead, we feel euphoric, lazy, and carefree.

In the Western world, kava has become very popular as an alternative to alcohol, with the appearance of kava bars all around the world that serve kava to its patrons.

Damiana has the botanical name Turnera diffusa. It’s a small flowering plant with aromatic leaves. The scent of damiana was used to flavor liqueurs and is believed to be the original flavor for margaritas.

This herb comes from Mexico and Central and South America. It loves warm, humid weather, and tends to grow in areas that are unsuitable for other plants — such as in dry spots alongside roads or fields.

Damiana is primarily used for its relaxing effects, but also has a long history of use as an aphrodisiac. There’s some research suggesting damiana can be used to prevent antibiotic resistance to medications as well — but this isn’t a common use for the herb at this time.

Most people use damiana in the form of tinctures, capsules, or tea — but it can also be smoked. Much like kava, large doses can cause a mild inebriation. With damiana, the effects of inebriation tend to be more in the mind — producing feelings of euphoria and arousal.

The Differences & Similarities Between Kava & Damiana

Kava and damiana are totally separate plants, with no direct botanical connections. However, the two have a lot in common in how they’re used, and the effects they produce.

Both Herbs Are Used Ceremonially

Kava and damiana have a long history of use in ceremonies from their respective origins. Indigenous cultures tended to use herbs with psychoactive effects for ceremonial use. Both kava and damiana have some mild psychoactivity in higher doses. This effect is nothing like that of other entheogenic herbs like psilocybe mushrooms (magic mushrooms), ayahuasca, or marijuana — but it was enough to make them useful for spiritual applications.

The difference between the herbs was in how they were used ceremonially.

On Pacific islands like Vanuatu, kava was used by mining the root with water to make a strong infusion. This was then drunk one by one by members of the group.

In Mexico, where damiana has a long history of use, the herb was usually smoked along with other herbs.

Both Herbs Have Similar Uses

Kava and damiana are both traditionally used for reducing stress, easing anxiety, and helping people get to sleep. They achieve this in much the same way using the GABAergic neurons in the central nervous system.

When we become stressed, the PNS is inhibited — causing us to feel alert, agitated, or anxious.

Herbs like kava and damiana increase the activity of the PNS by making our nerve cells more sensitive to GABA. This slows down electrical activity and makes us feel more calm and relaxed. As a byproduct, increasing GABA activity can also improve our digestion, immune function, and sleep.

It should be noted that although both herbs have similar uses — kava is much stronger for the anxiolytic and sedative effects.

Damiana Has Other Notable Uses That Kava Lacks

Damiana also offers other benefits unrelated to the sedative or anxiolytic effects. For example, damiana is widely used as an antibacterial and antifungal — both topically and internally. As mentioned above, it’s even suggested to contain compounds that inhibit bacterial resistance to medications. It’s thought to achieve this by damaging the efflux pumps on resistant strains of bacteria — preventing the bacteria from being capable of removing antibiotics once inside the cell membrane.

Perhaps the biggest difference between damiana and kava is that damiana is a strong aphrodisiac. In fact, this is one of the most common reasons for using damiana and the reason it’s become so popular as an additive to alcoholic drinks.

Kava does not have this effect, and there are no reports of kava being used as an aphrodisiac. In fact, the opposite is more likely. A common side effect of kava use is lowered libido.

Can Kava & Damiana Be Mixed?

Kava and damiana can be mixed, and there are a few good reasons for doing this. However, caution should be advised when mixing damiana and kava. The effect profiles of these plants are very similar, so you may end up getting effects that are stronger than you intended. It’s recommended that you start with a smaller dose of each than you would normally use first to see how it affects your body.

Only after you understand how the combination interacts with your body individually should you move on to larger doses of each.

So why mix damiana and kava at all?

Mixing herbs is a common practice in herbal medicine. The idea is that a combination of herbs that exert similar effects or have the ability to counteract a side effect of another makes for a better formula than either pant on its own.

A similar case could be made for combining damiana and kava. The effect profiles are very similar, but each herb also has its own additional set of effects. By combining the two together, you may be able to broaden the effect profile — making it more effective for reducing stress, anxiety, and sleeping issues.

Taking damiana and kava in combination is reported to have a stronger euphoric effect while maintaining the sedative and anti-anxiety benefits. Damiana may also help alleviate some of the negative effects of kava such as nausea and dizziness.

I’ve found that the biggest difference when adding damiana to kava tea is that it changes the overall effects to have more of a heady profile — even with kavas that are generally heavier in nature.

There’s another benefit of adding damiana to your kava too — it improves the flavor.

Kava is not known for its taste. In fact, most would consider kava as being an “acquired taste”. The bitter, peppery flavor and chalky texture can take some time to get used to.

Damiana, on the other hand, has an excellent flavor unlike anything else. Adding damiana to the brew helps cut the bitterness of the kava to make it easier to drink.

How to Mix Kava & Damiana

Mixing these two herbs together is simple — there are four main ways of going about it:

1. Mix The Dried Herbs Together Before Infusing With Water

You can mix kava and damiana by combining dried damiana leaf with kava powder in the filter bag, and mixing into water as you normally would during a traditional kava preparation. You’ll want to use about half as much damiana as kava by weight.

One of the easiest ways to mix these herbs is to make your kava as you normally would, and then adding a few drops of damiana tincture to the final brew.

It’s important that the damiana extract you use doesn’t have any alcohol in it because kava and alcohol are a bad combination. You can find damiana tinctures made from glycerine instead of alcohol, which has the added benefit of having a sweet flavor to it.

3. Take Capsules of Each

If you prefer to use capsules, both damiana and kava are available in capsule form as well. Make sure to follow the directions on the packaging for each.

This combination of damiana and kava is becoming more popular, and there are a few premixed products containing the two.

If you can’t be fussed mixing these herbs together yourself, you can always seek out a preformulated option.

Despite originating from very different parts of the world, their chemical effects are strikingly similar.

Both kava and damiana are used for reducing anxiety, easing stress levels, and supporting a good night’s sleep. In general, kava is much stronger for these effects than damiana. However, damiana has the added benefits of being an aphrodisiac and antibacterial. Damiana also tastes much better than kava and can be smoked to deliver its effects.

Some people have started combining damiana with their kava to increase the effects. The biggest difference you’ll find when mixing these herbs is a stronger sense of euphoria with the combination. It’s a good way to push the balance of a heavy kava towards more of a heady effect.

If you’re mixing kava and damiana together for the first time, it’s recommended that you start with a dose lower than the recommended amount for each. This is because the effects of the two herbs in combination may be much stronger than expected. By starting with a low dose, you can see how the formula affects your body individually before increasing the dose as desired.